Google Hangouts for iOS received a major update this morning, bringing animated stickers and Vine-like video messaging. The previous version of Hangouts for iOS lacked many features of its Android counterpart but has now surpassed it. There’s no word from Google about when Android users can expect to see these new features.

Stickers are big business for messaging apps like LINE so it’s nice to see them in Hangouts. Unfortunately, the selection is mediocre and doesn’t feature original artwork.

Short video messages are also a nice addition, letting users send up to 10 seconds of video. Videos won’t play unless you tap on them but the thumbnails show an animated gif of the video.

The update also brings location sharing, which has been in the Android version but was missing in iOS. This means you can send an exact location to your friends. 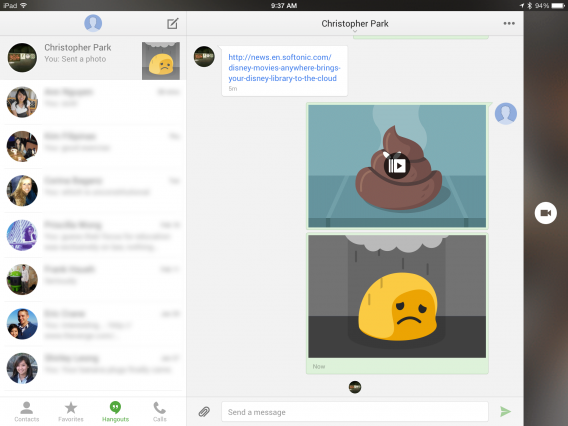 Hangouts of for iOS also gets a redesign with new chat bubbles and an iPad optimized interface. iPad users will have a two column design with your chats listed on the right and your current chat on the left. There’s also a dedicated video chat button that runs along the right side of the screen.

The mobile messaging battle is heating up. With Facebook’s pending purchase of WhatsApp, messaging apps are all trying to find unique ways to draw more users. These new features in iOS should increase interest in Hangouts but Google is still competing in a crowded space.